Virtual And Augmented Reality In Medicine 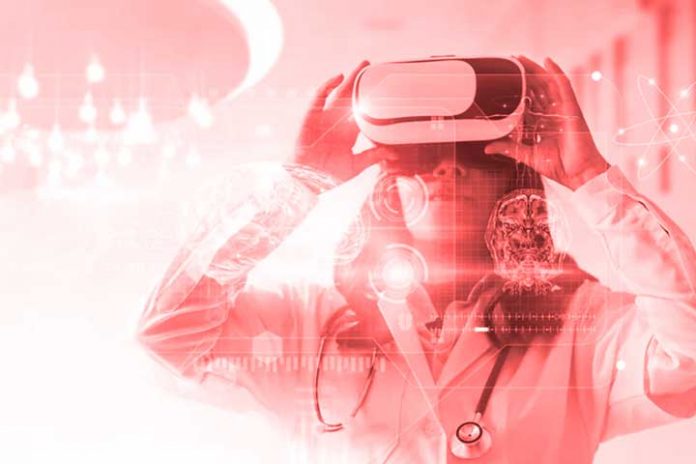 Augmented reality (AR), virtual reality (VR) and extended reality (XR) provide numerous possibilities and solutions in medicine: from the training of new doctors and practitioners with simulators and immersive encyclopaedias programs to raising awareness among patients before an operation to greater precision in surgical interventions thanks to robotics and virtual environments.

Although the benefits of Virtual Reality (VR) and Augmented Reality (AR) in medicine are being promoted by hospitals, research centres and universities, there are still some obstacles that industry and technology face for its massive implementation. Some of the most prominent are the costs associated with hardware and software, the feeling of dizziness that VR glasses produce when used for a long time, and the need to establish balances between virtual medicine and physical practice.

In our HELIX community, we continue to delve into the most outstanding advances in VR/AR/XR in corporate environments, reviewing some economic sectors that have already incorporated this technology, such as the automotive industry or education.

One of the most outstanding benefits of VR and AR technology in medicine is in the training field, both theoretically and practically. In the theoretical field, medical students can study the organs of the human body in 3D models, which would significantly reduce the donations demanded by universities for research and training. The Touch Surgery company, which works with Stanford and Harvard Medical School residents, has a virtual archive with more than 200 VR videos so that students can take immersive trips inside the human body.

The Body VR APP, available on the Oculus Quest and Steam platforms with the HTC Vive device, offers similar features but is aimed at a non-professional audience. Like the project designed for children Virtuali-tee by the British company Curiscope, which shows the human body in Augmented Reality (AR) for educational purposes.

On the educational front, Osso VR has developed immersive experiences with haptic products, such as tactile feedback gloves, to improve surgical training and evaluations for medical students at Vanderbilt University.

One of the operations that carry a higher level of risk is surgery. To minimize their execution, the Royal College of Surgeons in England signed an agreement with Fundamental VR to train upcoming surgeons in safe environments on simulators. At the same time, the VR simulators from the Health Scholars company use Artificial Intelligence algorithms to recreate emergencies that could appear in hospital emergency rooms. Each simulation is developed under the supervision of well-known hospitals in the United States, such as Cedars Sinai, Mount Sinai in New York, the New York City Health & Hospital centre, and different industry associations.

Thanks to this technology, patients can receive a better preventive evaluation of symptoms and diseases.

The company Ocutrx Vision Technologies has developed Oculenz AR glasses for patients with severe age-related macular degeneration, showing vision loss from the long-term effects of their lifestyle, which could help raise awareness to initiate a change of habits.

Some of these developments also help detect some pathologies, such as concussions. That’s the case with SyncThink, which works with Massachusetts General Hospital and Georgia Tech University, where its VR headsets track eye movement and make it easy to assess.

In some hospitals, VR glasses are used to treat preoperative anxiety or as a tool to reduce the pain and anguish of patients admitted with certain pathologies.

In 2018, the Hospital carried out some experiences with VR for patients who were going to undergo gastrointestinal surgery to prepare them for their arrival at the hospital and explain the anaesthesia procedure. The program never showed what the operation consisted of.

During the Virtual Reality Endoscopy 2021 congress, the endoscopy unit of the Quirónsalud Hospital in Malaga broadcast this type of exam in VR to a conference held in Madrid, where a virtual operating room was recreated to broadcast the video in an immersive 360º format through the latency of Telefónica ‘s 5G networks.

Reducing unforeseen events during surgical intervention is another outstanding application of VR/AR in medicine. The Vicarious Surgical company has designed surgical robots, which, aided by VR visualization systems, can improve the precision of some interventions and reduce the most invasive procedures.

Other applications of Augmented Reality (AR) of the human body allow all the details of an organ attacked by a disease to be recreated in 3D, which would help doctors to prepare with greater detail the removal of cancer.

To improve the stay of hospitalized patients, the Jiménez Díaz Foundation, together with the Infanta Elena (Valdemoro), Rey Juan Carlos (Móstoles) and General de Villalba university hospitals, has incorporated virtual reality devices to entertain patients of some pathologies, such as oncohaematological, paediatric, palliative and pneumatological. The ‘ Live: travel, fly ‘ program allows access to different applications to visit countries, travel the seabed, or participate in meditation courses.

VR technology also offers great advances in diseases’ remote care, pathologies under treatment and primary care. The XRHealth company designs virtual clinics to improve patient care services and offers virtual therapies so those affected by a disease can exchange experiences and talk with specialists in that area.

Other companies have designed specialized programs to treat different diseases. This is the case of Karuna Lab, which markets virtual reality simulators to help alleviate chronic pain, and OxfordVR, which designs applications and software to treat some mental illnesses and phobias, such as acrophobia, whose simulator has made great strides in patients with a pathological fear of heights.